Today almost every home and small home office has a home network, and an Internet connection.

The current home network enables multiple devices e.g. PCs,tablets etc to connect to each other, and also to connect to the internet.

Today most home networks will use a mixture of Ethernet and Wi-fi wireless networking technology and the TCP/IP networking protocol.

Smart Home devices will connect either directly to the existing home network or else indirectly via a hub or gateway.( Zwave and Zigbee). See Home automation basics.

Current home networks that connect your tablet,PC and Smart phone to the Internet are based on the TCP/IP protocol.

Most homes will already have this network in place.

The following tutorial will help you understand, build, and extend a home TCP/IP network.

Home networks use TPC/IP and although you don’t need to be a TPC/IP expert you should at least understand the basics, particularly device addressing and address allocation.

You will also encounter network problems so being familiar with troubleshooting tools like the ping command will be of great benefit.

Smart home devices are almost all wireless devices. The initial requirement of these devices was for low powered devices which meant that  Wi-FI wireless technology that is used on TCP/IP based networks was not considered suitable.

Therefore the first home automation devices were developed to use Z-Wave or Zigbee wireless technologies.

The main advantages of these technologies is low power and they are not affected as much by the building layout giving them better coverage.

Because these technologies don’t use WI-FI or TCP/IP they don’t have an IP addresses.

This means that you cannot connect a Zigbee or Z-Wave device directly to a WI-FI or TCP/IP based network.

However to really be smart, devices should ideally be controllable from across the Internet.

Which in turn means that they will need to connect to  TCP/ IP network.

Therefore many home automation networks will require some form of hub or gateway to connect them to the existing Wi-Fi or Wired network and will look like the one shown in the diagram below: 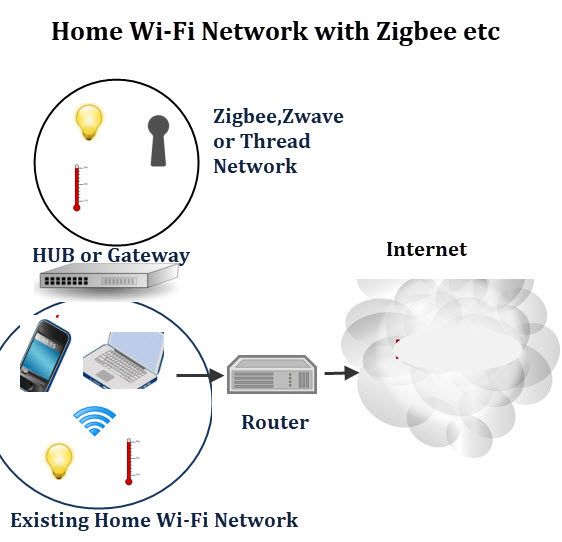 Devices using ZigBee and Zwave form their own network independent of the existing home Wi-Fi network ,but can be connected to the existing Wi-fi Network using a suitable hub or gateway.

Thread is a newer standard sponsored by Google and uses IP networking ( zwave and Zigbee don’t) but uses 6lowpan and not Wi-Fi.

Note:The industry has recently standardised on the Matter protocol which was standardised by the major smart home providers -Google, Apple and Amazon.

Smart devices will also have a variety of addresses depending on the protocol that they are using.

Zigbee and Z-Wave networks don’t have IP addresses but use their own addresses structure.

and the Smart hubs and Gateways guide

Note: The terms hub and Gateway are used interchangeably on smart home networks. See what is a Hub

Connecting To The Internet

Almost all home networks will be connected to the Internet.

It is a good idea to isolate the network containing smart devices from the rest of the home network.

This can be done using VLANs see VLANS on Home Networkss

Many new smart devices are now using Wi_fi (e.g. Sonoff) and so can connect directly to the existing home Wi-Fi network.

However because of the early adoption of Z-wave and Zigbee, there are many device types that are currently only available for Z-wave or Zigbee.

It seems Z-Wave, because of its simple design dominates but there are many big players supporting Zigbee (e,g, phillips Hue) .

In addition there are also proprietary home automation networks and protocols like Mi Home (UK).

Personally I think Wi-Fi will dominate in the future with Z-Wave and Zigbee being used in special or legacy environments, and were low power and range are important.

With the emergence of matter devices the thread protocol thread is likely to become the most popular along with Wi-Fi.

Quick Quiz to test your knowledge of Home networking concepts and technologies.

You have already completed the quiz before. Hence you can not start it again.

You have to finish following quiz, to start this quiz: