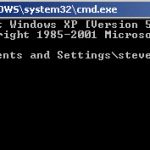 Windows has some very useful networking utilities that are accessed from a command line (cmd console).

On Windows 10 type cmd in the search box to open a command console.

These basic networking commands are mainly used for getting system information and troubleshooting networking problems.

Here we look at 10 commands that I use most often.

The ping command is one of the most often used networking utilities for detecting devices on a network and for troubleshooting network problems.

The general format is ping hostname or ping IPaddress.

This article covers the ping command in more detail.

Another indispensable and frequently used utility that is used for finding network information about your local machine like IP addresses, DNS addresses etc

Basic Use: Finding Your IP Address and Default Gateway

Type the command ipconfig at the prompt.

Ip config has a number of switches the most common are:

ipconfig /all – displays more information about the network setup on your systems including the MAC address.

A very simple command that displays the host name of your machine. This is much quicker than going to the control panel>system route.

This is used for showing the address resolution cache. This command must be used with a command line switch arp -a is the most common.

Type arp at the command line to see all available options.

Used for displaying information about tcp and udp connections and ports. See tcp and udp ports and sockets and how to use the netstat command

View a list of running tasks using the tasklist command and kill them by name or processor ID using the taskKill command- See this tutorial.