Although we are used to using names (e.g. www.google.com) when surfing the Internet, the Internet works on numbers called IP addresses.

The DNS (Domain Name systems) is a system for providing name resolution for computers located on the Internet.

The name,known as a Domain Name., has a specific syntax and looks something like www.google.com.

DNS services are provided by Google and other providers like your ISP( Internet Service provider).

It is important to understand that none of your home devices are listed in the DNS servers.

A computer name doesn’t have a structure and is common on windows home networks. e.g. workstation6

Domain names have a structure and look like this workstation6.mydomain.com.

Domain names aren’t common on home networks as home networks don’t usually have many devices, and don’t have a local DNS service.

However on home networks it is common to use names when accessing services on other machines on a home network.

When viewing other machines in network neighborhood they are listed by name and not IP address.

So if DNS isn’t used what is?

Windows machines have several name resolution methods, and in resolving a name a windows machine might try several different methods.

The order in which it tries these methods depends on the name i.e. is it a domain name, and the service e.g.An Internet service like http, or a local service like net use etc

The methods used for traditional Windows services like file sharing are:

On windows XP,windows 7 the hosts file is located in c:\windows\system32\drivers\etc\,

Note: It may be hidden so will need to enable view hidden files to see it and you may need to open it as an administrator.

When a windows machine resolves a name it stores it temporarily in memory.

This means that if you access that machine again it doesn’t have to resolve the name again.

You can view this cache using the nbtstat command. 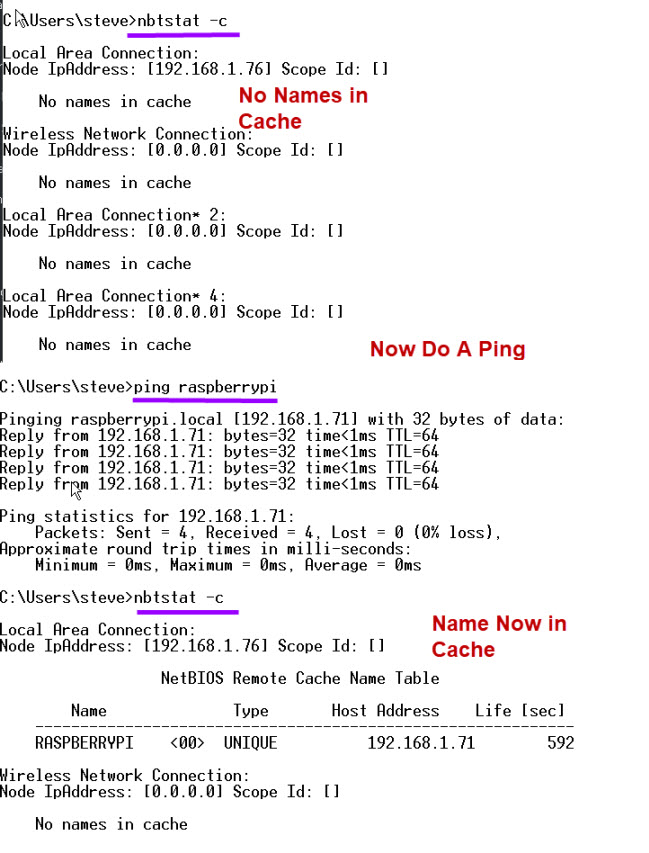 This is the main name resolution method on a windows home network.

A machine simple ask all other machines if they have a particular name and if they do then they respond with their IP address.

in other tutorials you might find LMhosts file and Wins mentioned.

LMhosts is basically a hosts file but for windows names. It requires configuring and is not normally used. It is located inthe same folder as the hosts file.

MultiCast DNS – Multicast DNS is a new addition to name resolution which has recently been added to all operating systems including Windows. This is likely to become the default mechanism in the future. See Understanding Multicast DNS and Service discovery. (coming soon)

Q- Can I install and configure my own local DNS server for local name resolution?

A- Yes but it is not a simple task. On linux (Pi) the popular choice is DNSMasq.

Q- What happens on mixed networks i.e. windows and Linux?

A- It depends on how they are configured. The screen shot below shows that I can ping a raspberry pi from my Windows machine. 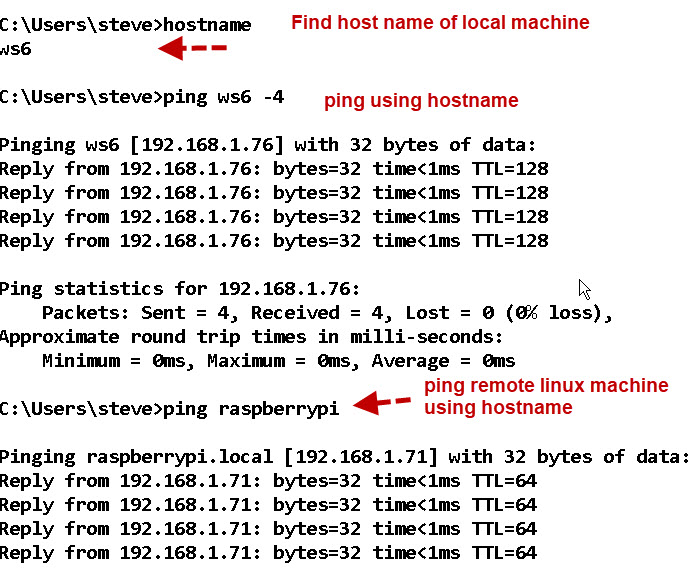 See end of this thread

The top level domain name .local has been reserved for home networks and is used by MDNS (multicast DNS).

If you are setting up your own local DNS server then the list of recommend names is: (Appendix G. Private DNS )

For home networks .home is a good choice.

Q- What is the .local Domain name?

A- This reserved domain name is used by the mdns service.