A smart home device can be considered to be made up of three major Components.

This is almost always wireless and there are a number of wireless technologies in common use. They are

Regardless of the wireless technology being used by the device to qualify as a smart device it should be controllable over the Internet.

In order to do this it needs to either support the IP protocol of use some form of hub/gateway. See Home networking basics.

Smart Devices are normally controlled using either the HTPP protocol or the MQTT protocol.

HTTP is the protocol used on the web for reading web pages, and because of its availability it has been used in almost all existing smart devices. See Controlling smart home devices using HTTP

However it wasn’t designed for this, and is fast being replaced by MQTT which is a light weight messaging protocol, ideally suited for this application. See MQTT in smart Homes.

Many devices can be controlled using both protocols.

Smart home devices can be controlled :

For example I have a Salus IT500 smart thermostat which I can control locally on the thermostat, using an App on my phone, and on my computer using a web browser.

These APIs provide a series of commands and responses.

This usually involves the App, and the device connecting to a website on the Internet which lets you setup and control the device.  This is shown in the schematic below: 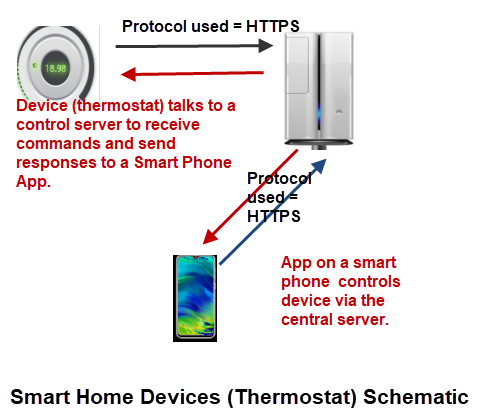 Easy to setup and no need for a third party Dashboard or controller.

Many devices now advertise that they will work with Alexa etc.

The way this works is the Alexa skill running on the Amazon server sends the commands to the cloud server of the device manufacturer and functions just like a normal control APP. This is shown in the diagram below: 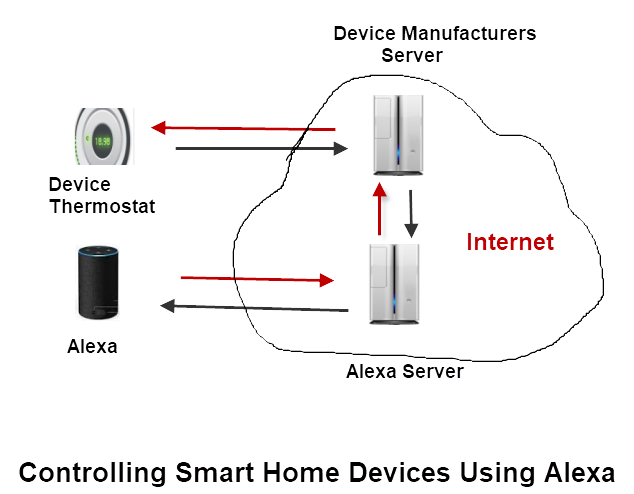 Software called a skill (Alexa) is usually provided by the device manufacturer, and that way they don’t need to publish their control API.

My preferred method is to control devices locally without requiring an Internet connection.

There are numerous home automation hubs available for doing this and they can be divided into:

You can also build your own using node-red. The choice depends really on.

The advantages and disadvantages of the local control are:

There are several different ways of controlling smart devices the most common being a phone App provided by the device manufacturer.

When purchasing devices from different manufacturers you need to be aware that they will usually use different Apps.

Home automation hubs both hardware and software are used to provide a single control panel for devices regardless of the manufacturer and control protocol.