Do You Have a Question? Use the comment form at the bottom of the page to ask

Q- What is Important when Purchasing new smart home devices?

A-You need to pay special attention to the networking protocol they use especially if you already have smart home devices. See Smart home networking Basics.

Q- Would you recommend sticking to a single smart home device supplier?

A- Although I don’t like it I think it would be wise to stay with a single supplier especially if you are non technical.

A- Mi|home is smart home system from Energenie. It uses a proprietary networking protocol to control a collection of smart home devices sold by the company.

Q- Can I have more than one echo device in my home?

A- Yes echo devices have ESP (Echo Spatial Perception) which means that only the closest device responds. You can also change the wake word for each device. See Amazon help for more details.

A- Yes you can control smart devices using a variety of interfaces.

Q- Do all Home automation devices use the IP Protocol?

A- No Currently the two most common home automation protocols don’t use IP and so require a hub/gateway to connect to your home IP network.

Q- What is the most popular Home automation protocol?

A- Currently it is probably Zwave

A- MQTT is a messaging protocol which is fast becoming a de facto standard for home automation and IOT messaging. See Smart Homes and MQTT

In networking hubs connect devices together at the datalink layer.

So you have Wi-Fi hub and Ethernet hubs.

Q- What is a Gateway?

A– A gateway connects two different systems together.

For example you need a gateway to connect a zwave network to an IP network.

However the terms gateway,router and hub are used very loosely in Home automation and you find that devices described as hubs are really gateways.

Q- What is the Amazon Echo

A- Amazon echo is a voice and speaker unit sold by Amazon that operates with Amazon Alexa.

Q- What is Alexa?

A- Amazon Alexa is personal voice assistant service from Amazon It runs in the cloud, and can be used to control devices and hence used as a home automation system.

Q- What is a Skill

A skill is a piece of code used with Amazon echo and developed by third parties using the Amazon Echo to control home devices. See here

Q- What is IFTTT?

IFTTT stands for If this then that. It is a web based service that uses triggers to interact and control other services and devices. See wiki

What is a URL (uniform resource locater)?

A URL is defined as the absolute address of a web page/resource on the Internet. For web pages It is also called the web address.

The URL structure is: 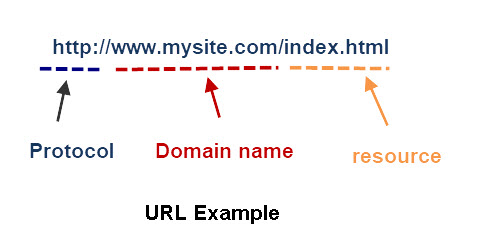 Notice the port is usually omitted when using a web browser as it uses the default port of 80.
Below is an example using a port number:

Q- What is JSON

JSON (JavaScript Object Notation} is a method of encoding JavaScript objects as strings so that they can be sent over a network or stored in a file.

Q- What is Zigbee?

Q- What is Zwave?

Q- What is Thread?

What is a Geo-Fence?

A geo-fence is a virtual perimeter for a real-world geographic area.-wiki

A common use is to trigger an event when you are in a particular location. For example you could use it to trigger the heating to come on when you were near to your home.

The ESP8266 is a low-cost Wi-Fi microchip with full TCP/IP stack and micro controller capability produced by the manufacturer Espressif Systems in Shanghai, China.-Wiki

What’s the difference between TCP and UDP?

What does LAN stand for?

LAN stands for Local Area Network and your home network is a LAN.

What Does WAN Stand for?

WAN stands for Wide Area Network and the Internet is an example of a WAN.

What is the WAN port on my router used For?

What is the difference between a Router and a Switch?

A –  A Router divides a network into smaller networks called subnets. Each subnet has an allocated range of IP addresses.

Devices on different subnets may or may not be able to communicate depending on the router setup.

A switch doesn’t divide a network into subnets and all devices can connect to each other and there is no setup required.

What is the difference between a Gateway and a Router?

A –  A Gateway is a device that translates from one protocol to another, just like a translator would translate from English to French. Common gateways are email to fax, email to SMS.

A router connects two networks at the networking level. It will route IP to IP,IPX to IPX but not IP tp IPX as that would be a translation as they are different protocols.

However on home networks the names are used very loosely.

What is the Default Gateway?

When configuring TCP/IP networks you will come across the term default Gateway. It is basically the main way out of your network, and is usually the address of your home router. Often 192.168.1.254

Can I have two routers on my Home Network?

Yes but it is much more difficult to setup. Most Home networks have a single router that connects the network to the Internet.

What is the Difference between an ADSL Router and a VDSL router?

What is a Firewall and Do I need one?

A firewall restricts network packets and is crucial to network security.

In addition computers have software firewalls to protect them and this should also be enabled.

What is a Guest Network?

Many modern routers provide an open Wi-Fi access point that guests can connect to.

Once connected they can only access the Internet connection and not your home network.

Does my Network Need a Server?

No Most home networks don’t have one.

What is a Server?

A server is the name given to a machine that provides a service (it serves) examples are web servers,media servers etc. On large corporate networks a computer is dedicated as a server e.g. a web server and that is all it does.

However on small networks a single computer e.g. raspberry Pi, Windows 10 might act as a web server,media server etc.

What is important to note is that servers are normally always on.

Q- What is Auto MDIX?

This is found on Ethernet ports and detects the transit and receive and adjusts the port accordingly. All modern devices support this feature and this eliminates the need for Ethernet crossover cables.Older switches that didn’t support auto MDIX had a special uplink port for connecting to another switch.

On Windows go to a command line a type

This is because your machine cannot locate a DHCP server and it has assigned its own address..

Where does my IP Address come from?

On most networks addresses are assigned by a DHCP server. The DHCP server on home networks is generally your router.

See Understanding DHCP and this video on creating a Home network

What is a Fixed IP Address?

Most network devices use an IP address assigned by a DHCP server. This is known as a dynamic IP address.

However it is possible to manually assign an IP address to a device and this is known as a static IP address.

A static IP address is used when it is important that the IP address doesn’t change and this is commonly used when using port forwarding to provides services on the Internet.

What is a Sub Net Mask?

Networks like the Internet consist of millions of devices. To make these devices easy to locate and because of the mechanics of the networking protocols they are divided into smaller networks called subnets.

These networks are then combined to form larger networks like the Internet.

NAT stands for network address translation and is a technique for sharing an IP address on IPv4 networks. All home routers support NAT.

What is a mesh network?

A -A mesh network is a network topology were the nodes connect directly and dynamically and not in a hierarchy. See wiki for more details.

Where is my DNS Server?

A- Most home networks don’t have one but instead use the DNS servers of their ISP (Internet Service provider).

A- Although you will find that most of your computers have an IPv6 address as well as an IPv4 address it is probably not being used.

A- DMZ stands for Demilitarized zone and is a buffer area between you home network and the Internet.

Most Home routers support it but it is not recommended for inexperienced users. See this article

Q- What is Port Forwarding?

A- Port forwarding allows you to expose a home network resource to the Internet. See Understanding port forwarding

A- FTTP stands for Fibre to the premise and basically means your home router connects to the ISP equipment via fibre. See Internet Connection methods

A- FTTC stands for Fibre to the cabinet and means that your how router connects via telephone cable to a cabinet in the street usually a few hundred meters from your home. It then connects to the ISP via fibre. It is slower than FTTP.

A – VPN stands for Virtual Private network and it is a technique for providing a private connection across a public network using encryption. See VPNs and Proxy Servers

Do You Have a Question? Use the comment form below to ask