Instead of running new Ethernet cables to connect your devices to your home network why not use your existing electrical power cables?

That is the idea behind Powerline or Homeplug Ethernet networks.

HomePlug adapters are typically used to connect non Wi-Fi equipped devices to a home network, and to extend the  range of existing networks.

You normally buy homeplug adapters in pairs, and in this case all you need to do is plug them in, and they work.

However replacing faulty devices or extending an existing powerline network is a different story.


What you will Learn

In this guide we will look at powerline networking using  homeplug Ethernet adapters, how it works, and how you set up a home network. You will learn:

Devices like computers plug into a powerline adapter using an Ethernet cable with a UTP connector, just like they would plug into an Ethernet hub or switch.

The power line adapter then plugs into the mains, and uses the mains wiring to transmit the data.

Another power line adapter is required somewhere on the same mains cable system to extract the signal. 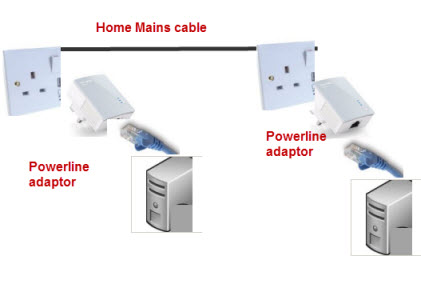 They are often used:

Powerline standards have evolved since the initial homeplug 1.0. It is important to be aware of the different standards because of potential inter operability issues.

You will probably face inter operability issues when you need to add another adapter to an existing network or replace a faulty adapter.

Note:
Coexist means that they do not interfere with each other when plugged into the same mains wiring system

Having a basic understanding of how the powerline network works is crucial to troubleshooting problems, and for building,repairing and upgrading them.

This means that in a neighbourhood of houses that all use powerline adapters there is a potential security risk.

To overcome this powerline adapters form logical networks based on a security key or password called a NMK (Network Management Key).

This key is used to encrypt the data on the network using 128 bit AES (AV2 standard) or 56 bit DES (AV1 standard). 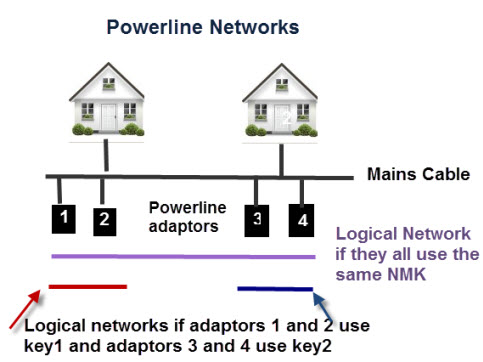 To build a powerline network you need at least two homeplug adapters.

Normally you buy adapters in pairs, and the manufacturer will normally ship each pair with a common NMK.

This means that when you plug them into your mains socket they will establish a connection between themselves, and form a logical network.

If they don’t automatically establish a connection then you will need to intervene and manually initiate pairing.

The basic idea is that you put one of the adapters in a receptive mode where it listens for another adapter trying to establish a connection.

You then do the same with the other adapter. The two adapters should locate each other and agree a shared key.

Note: the adapters will remember this key even if they are unplugged from the mains.

Note: On Older adapters (AV1) don’t have a share/security button to initiate the paring process you may need to program each adapter with the same key using the software utility that comes with the adapter.

Some manufactures will ship adapters with a common NMK.

This means that adding adapters to an existing network is easy as the new adapters have the same NMK as the ones already on the network.

However this is a security risk and you should change the NMK from the default.

This assumes that you have purchased the adapters as a pair. In which case just plug them into the mains socket preferably close to each other and they should pair.

Once paired you can move them to the required location.

If they don’t pair then use the pairing procedure below, but you may also want to consult the documentation that came with the adapters.

If pairing is unsuccessful then see troubleshooting section.

If one of you adapters goes faulty then you can replace it. However you should be aware of the following.

To pair the new adapter to the existing one use the same pairing procedure as covered above, If pairing is unsuccessful then see troubleshooting section.

Adapters must be added one at a time and the pairing process carried out each time.

For example to add two new adapters C and D to an existing network with adapters A and B then proceed as follows:

To remove an adapter from an existing network then press the security/NMK button for 10 seconds while still plugged it.

The adapter will generate a new random password which places it outside the existing logical network.

You should receive a DVD with your adapter containing software that you can use to mange your powerline adapters.

If not you should be able to download the software online.

I use TP-link adaptrrs and there are two utilities available.

The tpPLC.exe utility shows a nice powerlink map whereas the powerline scan .exe utility is for configuring individual adapters. 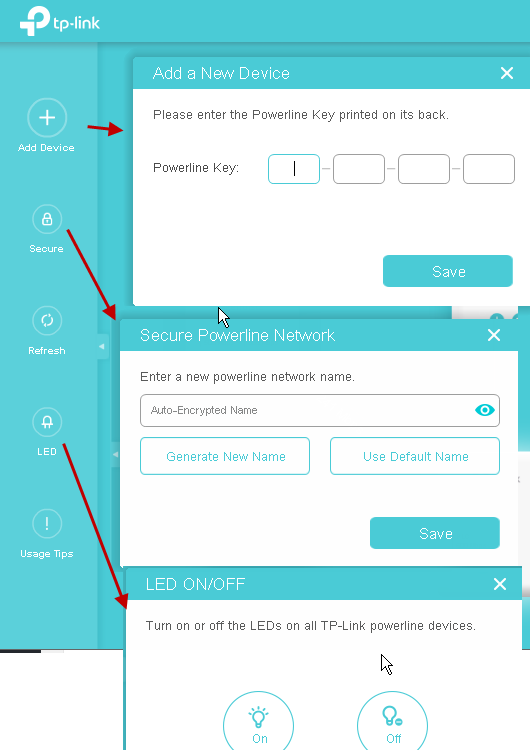 However the best feature is the network map which shows you all of the discovered adapters and the line speeds and an example is shown below. 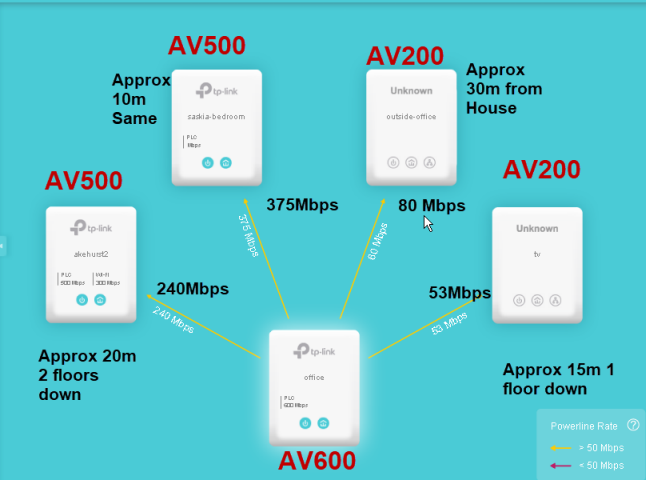 Just like WiFi there are published speeds for each powerline standard. These speeds are theoretical maximum speeds and you will no get them in practise.

The line speed you get is determined by the cabling in your home/office and the distance between adapters.

In addition because all powerline adapters share the same medium (mains cable) the number of devices that are connected also affects the throughput speed.

If you look at my diagram taken form my network you can see that the maximum line speed is much less than the theoretical speed and that distance also plays a role.

A good rule of thumb is to half the theoretical line speed so for a 600Mbps adapter expect around 300Mbps.

There is an interesting table on this forum page showing live test results for adapters under different load conditions.

However generally the speed for even the low speed av200 adapters is much quicker than the Internet connection speeds (15-100Mbps).

The line speed is the actual bit rate on the line. However because this line is shared by other devices the speed of each device (throughput) is less than the line speed.

So as a crude example if two device were sending on a 300Mbit/s line then each device would have a throughput speed of 150Mbps.

These are very difficult to measure as they work by transferring data between two computers at either end of the connection.

A common utility is LANSpeedTest by Totusoft which is a simple free and powerful tool for measuring Local Area Network (LAN) speeds.

It is not really for non technical users as it is not easy to setup.

A lot of people try to measure using an Internet speed checker but that measures your overall connection speed which is limited by the slowest link in the chain which is normally the Internet connection itself. See Understanding Home Networking Speeds

When purchasing high speed adapters e.g AV 500 and above check the speed of the Ethernet port as many older adapters used 100Mbps Ethernet.

So even though the line speed was 300Mbps the actual speed out was limited by the Ethernet port.

Powerline/Homeplug networks are very good way of extending your home network without running cables, and for connecting devices that need a fast and reliable connection.

Speeds are usually much better than Wi-Fi and much more reliable.