Although not many people can see the need for having their smart fridge connected to the Internet, most people will find the ability to  control lights, access security cameras and other home appliances very useful.

If you are thinking about adding smart devices to your home then this guide to home automation will give you a good basic understanding of how smart devices are connected, and the systems and protocols used to control them.

What is Home Automation?

Internet of Things vs Home Automation

Home automation is one of several areas of the IOT (internet of things), and is often called Home IOT.

Home automation or domotics is building automation for a home, called a smart home or smart house. It involves the control and automation of lighting etc –Wiki

There are three distinct levels of home automation.

The ability to view status of systems i.e

The ability to change the state of a systems i.e

The ability to change the state of a system automatically in response to an event. i.e.

Currently most smart home systems are at the control level.

Before you go out an buy anything you need to be aware of the components that make up a smart home automation system.

In addition you need to understand how these devices can be controlled and what protocols they use.

If you consider smart home automation consisting of three layers as shown in the schematic below with devices at the bottom end and networking devices in the middle and control applications at the top: 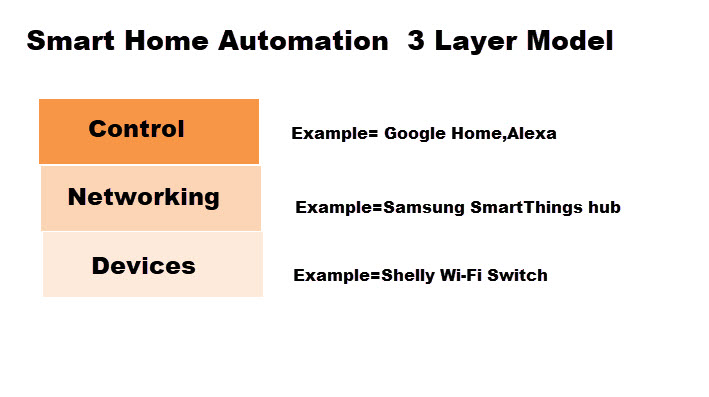 A home automation system will consist of

Personally I believe all homes should be able to be controlled locally from within the home.

They should also IMO be controllable and fully functional without an Internet connection.

In other words if you lose the Internet connection you should still be able to turn your lights on and off.

Unfortunately not all systems will operate without an Internet connection. This article is worth reading.

As a General rule of thumb Zwave and Zigbee networks and devices will operate without an Internet connection.

If the device is controllable directly using a smart phone then it usually requires an Internet connection.

Note: Since this article was first published there have been several cases of cloud platform being taken out of service due to the company going out of service and the smart devices have become unusable.

The Role of the Cloud In Smart Homes

Many Internet devices especially Wi-Fi devices are dependent on an Internet connection, and cloud services to function correctly.

Generally when you set up these devices you register them with the manufacturer on a cloud service.

They can then be controlled via an App on a smart phone, Alexa etc but will require an Internet connection to function correctly.

Although these devices are easy to set up and operate they are usually  useless without an Internet connection.

IMO the Internet should represent an alternative way of controlling devices, and not the only way

Today all smart home devices are wireless. Common technologies are:

Note:The industry has recently standardised on the Matter protocol which was standardised by the major smart home providers -Google,Apple and Amazon.

There are several different types of end device:

If your end device supports Wi-Fi then it can connect directly to you existing home Wi-Fi network.

if it uses Zigbee,Thread or Zwave or other protocols then it will require a hub of some sorts (diagram above).

See also Stack exchange-Do I need a hub for some devices?

However hubs can also perform other task besides interconnecting products using different protocols.

Smart hubs will generally provide a User Interface that allows you to manage the individual devices, and to set up automation rules.

This can be via an App on a smart phone or tablet or web browser.

Hubs can be located on the Home network or on the Internet.

Amazon Alexa is an example of an Internet based hub that is becoming very popular.

Because this protocol is being used you can control many smart home devices using a web browser.

However HTTP is not the main protocol for IOT (Internet of things) devices.

The choice here is MQTT (MQ Telemetry Transport ) and this will likely  become the main control protocol for home automation.

Many smart home devices will be bi-lingual in that they will support both protocols. e.g Tasmota devices.

Because of the popularity of smart phones and the fact that most devices use Wi-Fi, most smart home devices and systems can be controlled using an App on a smart phone or tablet.

However devices from different manufacturers will have a different Apps, and going back and forth between Apps is not very convenient.

Below is a screen shot from my Tablet showing the Apps to control several Wi-Fi smart devices from different manufacturers. 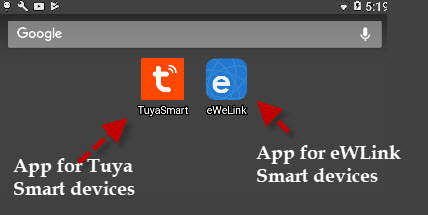 Not only is it very inconvenient to keep switching between Apps, the Apps can’t talk to each other, and you also need to install them on all devices that you use to control these devices.

However most of these devices can also be controlled by a hub like the Samsung Smartthings, Amazon Alexa or an home automation system like homeassistant.

Smart home assistants like Ask Google, Siri, Cortana and Alexa can be used for a variety of tasks including controlling your smart home, usually using voice commands.

Almost all devices being introduced today are being designed to work with Alexa and Google Home.

Almost all smart home product manufacturers provide a home automation system that you can use to control and monitor the devices.

Generally when you have several smart devices, especially when they are from different vendors then using some form of Hub/automation system to combine them is the best option. See Smart Home hubs,Gateways and  Smart Home Automation Systems

Getting Started -Picking a Starting Point

Now you are familiar with the components then it is time start building your smart home. So where do you start?

You can start either at the control level or at the device level.

In this case you decide that you will control your smart home using Google home, Alexa, Homekit, Samsung Smartthings etc .

Once you have made that decision then you need to buy compatible devices and any necessary networking components.

This is usually where most people start. For example you decide that you want a smart thermostat so you look around and choose one.

Later on you decide that you want to automate your lighting and so you choose devices fot that.

Now it is important to remember that devices use a variety of wireless protocols.

If you choose Zigbee or Zwave you will need a hub to connect it to the home network and the Internet.

If that is the case then why use these protocols?

The answer is wireless range and low power and also device availability.

If possible I would recommend you standardise on Wi-Fi.

Then you need to choose a control system or you could use the control systems/systems provided by the device manufacturer in which case you might find yourself using multiple control interfaces.