Network latency is the term used to describe network lag. It is the time taken for a packet to be sent and received over a network and decoded by the receiver.

It can be one way or two way depending on whether a response is required.

As an example if you tell Alexa to turn on the lights the latency or delay is the time taken for you issuing the command to the lights turning on.

There are several factors that contribute to network latency they are:

This is the main cause of Latency and usually cannot be avoided. The lardger the distance the greater the delay. 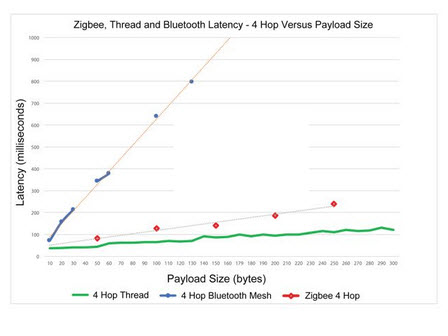 The two most popular protocols are TCP and UDP. Because data packets on TCP need acknowledgements it has a higher Latency than UDP. See UDP vs TCP

The more traffic on a network then the slower that network becomes and  the throughput decreases and the latency increases as the network traffic increases.

The end device service or application has to process the request and return a response.

The end application maybe for example a web server. How quickly it responds will be determined by the speed of the hardware running it and the load on the server.

The main factor on home networks will be network congestion. This can be caused by file backups, streaming media etc.

In addition the number of devices you have connected will also be an issue.

As mentioned previously Zwave has a higher latency than Zigbee and thread.

The screen shot below shows the latency using ping measured in milli- seconds. 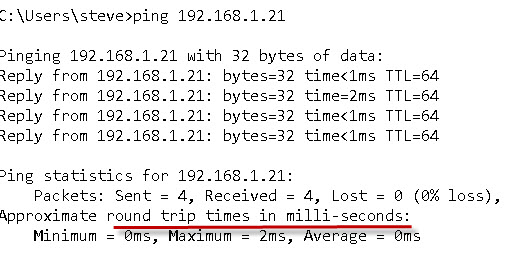 The following is a screen shot using the traceroute command (tracert on windows).

When used on an Internet connection it gives far more detail than a network ping as it will test each segment of the connection.

Q- Will Doing File Backups during the day Slow down my smart home Network.

A- Probably if you are controlling devices across the Internet.

Q- I have a small Zigbee Network of 10 devices should I worry about Latency.

Network Latency is a measure of the delay on a network and is affected by many factors.

Is it something that you need to consider on your own network depends on the number of devices, device types and network size (distance).

Generally a small network (distance and nodes) shouldn’t really have an issue with latency (delay).

Please Let me Know if you found it Useful
[Total: 0 Average: 0]