Can I have two routers on my home network is a very popular search term.

I assume that people are :

Most home networks consist of a single router which provides the Internet connection plus 1 or more network switches and Wi-Fi access points.

Network switches look physically a lot like routers as they have several Ethernet ports.

However network switches don’t divide a network into sub networks and are more common and simpler to use.

All devices on a switched network belong to the same network.

If you are unfamiliar with networks and sub networks think of two rooms with a door in between which is normally closed.

A room is essence represents a sub-network and is illustrated with the diagrams below showing a routed network and the room analogy. 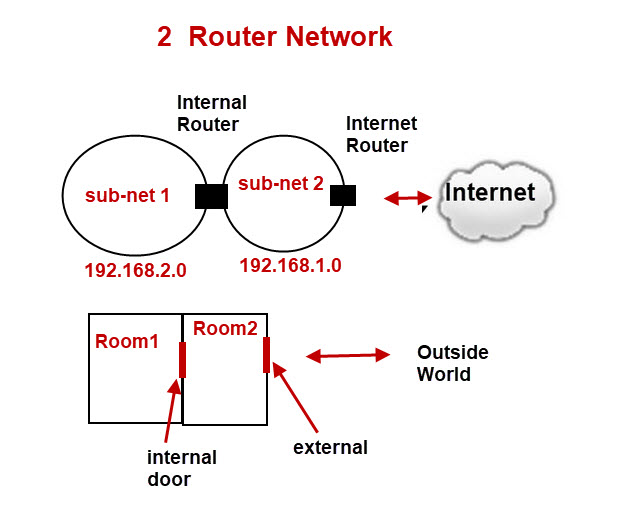 Advantages and Disadvantages of Using 2 Routers

In the room analogy each room represents a broadcast domain as someone giving a talk in one room cannot be heard by anyone in the other room.

If you do an internet search on 2 routers on a home network this is the solution that you will normally find.

The old router is configured not as a router, but simply as a Wireless Access point and an Ethernet switch.

This configuration is shown below: 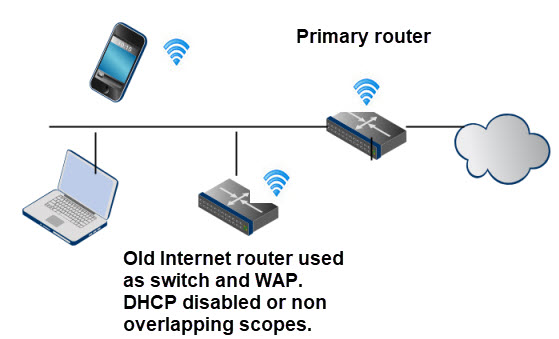 If you do this then you need to ensure that DHCP is disabled on the second router or it has no overlapping scopes with the primary router.

The IP address doesn’t conflict with the primary router.

You should also note that not all home routers will work in this configuration.

My BT home router will only work with an Internet connection, so it can only be the primary router.

Today most home networks use network switches and VLANs for security.

A VLAN lets you separate your home network into smaller networks that are isolated form one another and are much easier to configure than a routed network see Using VLANs on Home Networks.

switch when you can and route when you must.

How to Use Two Routers on a Home Network

With the rise in working from home then there has been an increase in the need for an alternative Internet connection if the main connection fails.

This can be achieved by using a second broadband or mobile router (more common).

It is covered in creating a backup Internet Connection

Having two routers on a home network isn’t common except for the case of creating a  backup Internet connection.

Using an old Wireless router as an access point is fairly common but you need to be careful when doing so and doesn’t always work.

Using a router to subnet a home network isn’t common and requires a good understanding of networking and subnetting. It may be necessary if you have a large number of devices on the network.

Q- Can I use two routers on the same home network?

A- Yes but you need to be aware of the possible problems.

Q- Can you use two routers on one broadband connection?

Q- Does having Two routers slow the network down?