Here we look at the 10 commands that I use most often.

The ping command is one of the most often used networking utilities for detecting devices on a network and for troubleshooting network problems.

The general format is ping hostname or ping IPaddress.

On Linux the command repeats at 1 second interval. To restrict the number of attempts use the -c switch

This utility  is used for finding network information about your local machine interfaces.

Type the command ifconfig at the prompt to view the IP addresses of all interfaces, and use

To shut down or bring up an interface use

Similar to ifconfig and has most of the same functionality. There is an excellent tutorial on using it here.

to target a particular interface (e.g eth0) use

to enable more details use the -v (verbose) switch

Note: the above commands only work if you are using the dhclient daemon.

Doing this on my PI has no effect as it uses dhcpcd daemon and not the dhclient daemon.

Used to display and configure routing information on your host.

It is only really used if you want your machine to act as a router on your network.

However it is also a quick way to find out the address of your gateway as shown in the screenshot below  where the gateway address is 192.168.1.1:

For more information on using the command see this article

Very useful tool for finding information on your network connections and ports.

You can use it to find out all of the tcp or udp ports that are active on your system.

If for example you want to know if the mosquitto broker was active on the server then use: 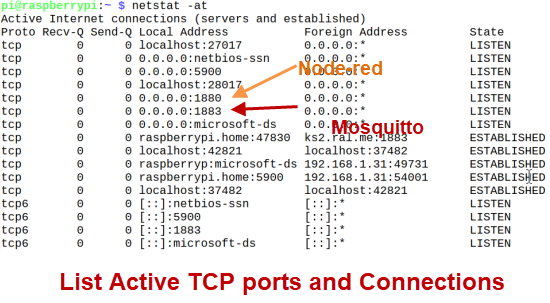 You can see that port 1883 (default MQTT port) is in a listening state.

It is automatically installed on Linux. Here is a very good tutorial on how to use it.-TCP dump Tutorial with Examples

Arp shows the address resolution cache. This will show the IP address and MAC address of devices that the machine knows about.

These tools are used for troubleshooting DNS issues. Nslookup was the original DNS tool and is available on Windows and Linux. Dig is more powerful and more modern tool to use.

The screen shot below show the results of a nslookup and dig query: 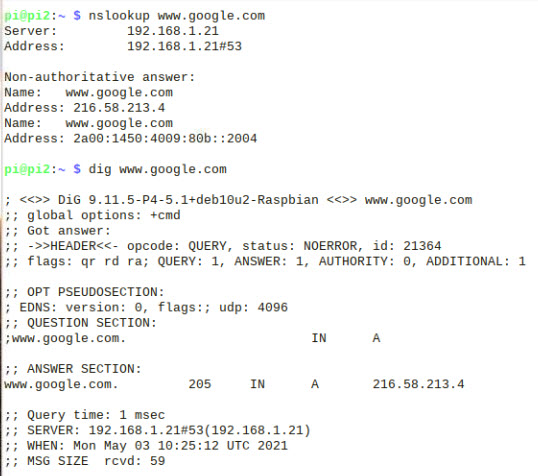 You can find a more detailed tutorial on using nslookup here and dig here including how to install it if it isn’t installed.

The host tool provides a different output to nslookup and dig. If you query the domain e.g. google.com you get to see the mail servers.

This tutorial shows how to use the host command in more detail.

This is used for viewing and setting up the firewall on Linux machines. By default no firewall rules are installed as shown in the screen shot below:

This howto goes into using it in more detail.

Please Let me Know if you found it Useful
[Total: 1 Average: 1]