How do you control your smart home device?

Well regardless of the wireless technology (Wi-Fi,ZigBee etc) or the application protocol (HTTP or MQTT) it is using, it is controlled via an API (Application Programming Interface).

So What is an API exactly?

What is a API (Application Programming Interface)?

An API is an interface used by programs to access an application.

It allows a program to send commands to another program or application and receive responses back from that application.

Many of the APIs today are Web API’s and are designed to use the HTTP protocol.

However the use of MQTT is growing fast and will,IMO, be the control protocol of the future smart home.

Because of the many existing devices currently using HTTP then HTTP is likely to persist well into the future regardless of the popularity of MQTT.

The API provides us with a list of commands and their responses.

Using these commands we can access a resource on another system.

In the case of our smart home, for example, we can turn a light on and off .

Regardless of the protocol all APIs require Endpoints.

An API Endpoint is defined as the end of a communications channel.

This is where an application sends requests to, and receives responses from.

An open API is an API whose structure and commands are available to the public and can be used for controlling applications and devices.

From a device owners perspective open APIs allow you to control your devices using third party Apps and also build your own control systems; using Node-Red for example.

This is what the device manufacturer Mystrom states on their API page. 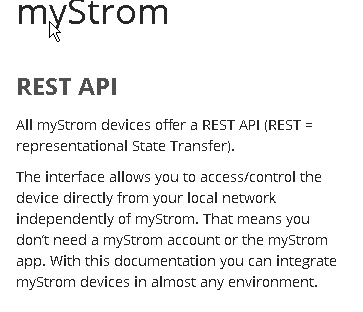 Not all devices provide open APIs, and so require that the user uses applications and services provided by the device manufacturer.

As an example the Sonoff switch out of the box is only controllable using the eWelink Smart Phone Application.

Generally devices are easier to setup and use as the work has been done by the device manufacturer, and not a third party.

They are also potentially more secure as the API isn’t published, and so it is more difficult for hackers to learn the commands to control the device.

The mystrom API accepts commands using the http protocol using both GET and POST requests.

However the choice is really up to the API designer.

The Mystrom API lets you turn the switch on and off using the GET request as shown below: 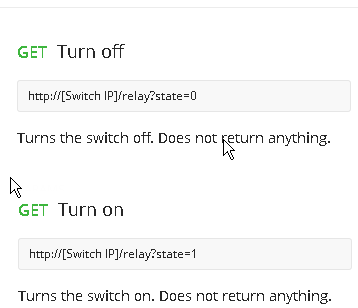 Generally the curl command line utility is used for testing HTTP REST APIs but because the GET request is the default request type of a standard web browser then you can use that.

As shown in the MYstrom documentation there is no response given to this command.

All smart home devices use APIs, but not all APIs are published and available to the user.

These are closed or private APIs, and means that you need to use applications provided by the device manufacturer to control the device.

I have developed a smart home simulator using node-red and it is an ideal way of learning more about APIs.