The tasmota firmware supports both the http and the MQTT protocol and you can use either protocol to control the switch.

You will need to first install the node. It is called node-red-contrib-sonoff-tasmota

The install creates a new category Sonoff and the node called Sonoff device.

The node is effectively a wrapper over MQTT.

To use the node just drag it into the workspace.
The node has  input and output connections.

In the flow below we use an inject node to send a command and a debug node to see the output.

In reality the output node shows us what we sent to the node and not what is sent on by the node using MQTT.

To view the messages sent by the node, and also received by the node we can use the mosquitto_sub tool.

In the screen shot below the node is connected to the broker and reports the switch state as ON even though It is not connected.

When deployed the node sends a status request message but doesn’t get a response.

Below is a screen shot of the node configuration screen. 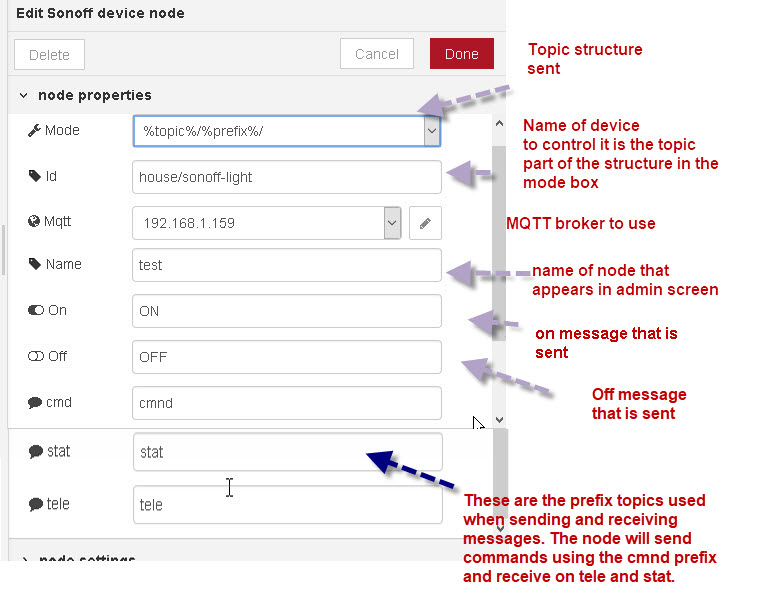 You need to set the mode to match the topic scheme you are using on the network.

The topic is the id you configure in the id field and the prefix is cmnd,tele or stat.

So using our structure we will see messages with the following topics:

You can set the on/off values that the node sends when it is triggered.

Below is the configuration of the inject node for triggering the on value. 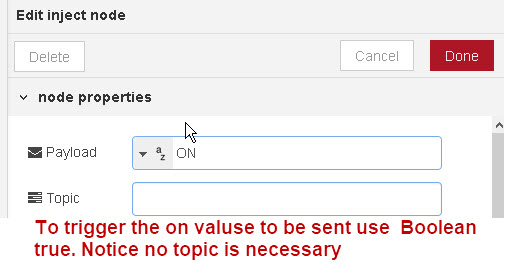 Turning the Switch on and Off

The flow in the download is a simple flow to send on/off to a switch using the inject nodes.

The screen shot shows the messages sent between the node and the switch.

Tasmota devices can be controlled by both HTTP and MQTT.

If you don’t have an MQTT broker or don’t want to use one then you can still control your Tasmota devices using node-red.

To do this you need to use the http request node which is one of the core nodes.

The http request node can be used for.

In the HTTP request node you can set the: 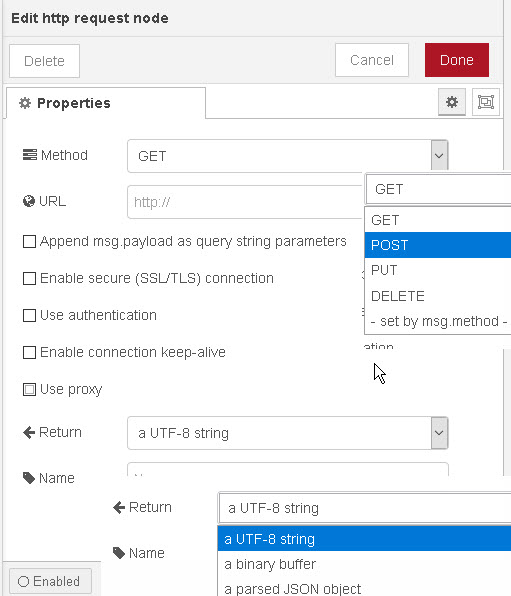 The request method and URL as well as other settings, like content headers, can also be set in the preceding node for creating dynamic requests.

The output is usually a web page but for our Tasmota switch it is JSON. If we leave it as a string means we will need to convert it ourselves to a JavaScript Object.

Turning a Switch On and OFF Simple Flow

Below is a screen shot of the basic flow. 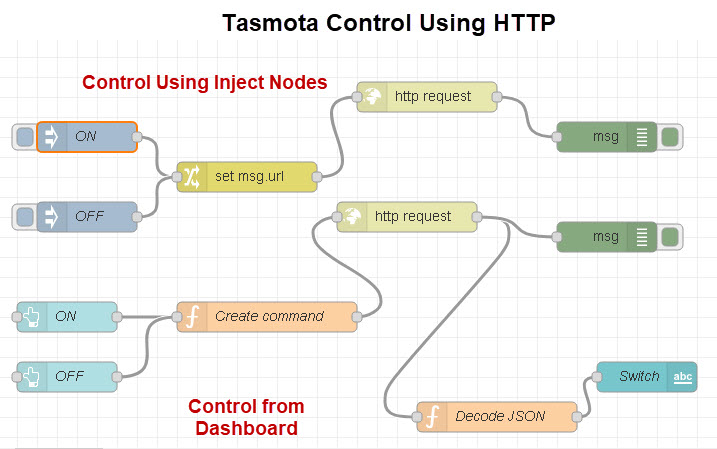 The flow is effectively two flows. The top flow using inject nodes to send the command. The inject node labelled ON looks like this:

You can see that we use the IP address of the switch and pass the command in the url. See controlling smart home devices using http.

The bottom node using dashboard buttons for on and off and also displays the status. The status is returned as a JSON string and needs to be converted to a JavaScript object to be displayed.

Please Let me Know if you found it Useful
[Total: 6 Average: 5]