What is Power over Ethernet (PoE)?

It is used for connecting remote devices that don’t have a convenient local power source like IP cameras, VOIP phones etc.

Ethernet cable (CAT 5,6 &7)  uses 4 twisted pairs. On early Ethernet networks operating using 10base T and 100base TX only 2 pairs were used for carrying data and the other two were spare.

These two spare pairs can be used for carrying DC power. In the IEEE 802.3 standard this is known as Alternative B mode.

As Ethernet speeds increased (1000Base T and above) then it became necessary to utilise all 4 pairs to carry data.

So to supply DC power you needed to supply power over pairs that were also being used for carrying data.

Because it is DC power this is relatively easy to do.

Alternative A mode was defined which sent power over the same cable pairs as used in !0Base T to carry data.

In both cases only two pairs are being used for carrying DC power.

This is shown in the schematic below: 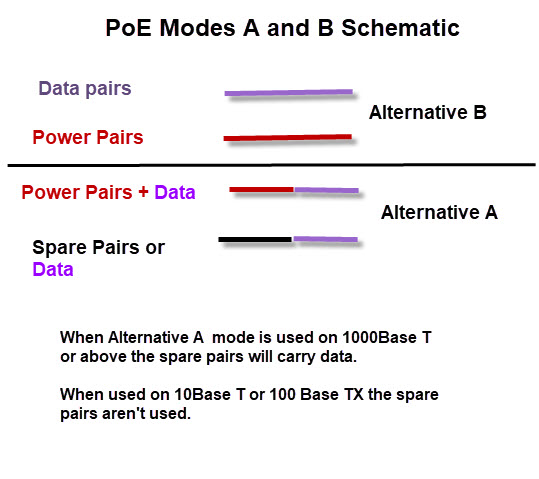 As the requirement for more DC power for end devices increased a third mode was defined called 4PPoE which uses all 4 pairs to carry DC power.

PoE as defined in IEEE 802.3 standard supplies power at 47V – 57 Volts DC. The difference in the standards is the amount of power that can be provided to end devices.

There are 4 standards designed to support 4 device types .

You should notice in the screen shot that it clearly states that it supports POE.

PDs must work in both Alternative A and Alternative B modes. Typical devices are cameras and Wireless access points.

The PSE determines which mode to use.

PoE Injector – These are used to connect a PoE end device to a non PoE device like a legacy switch.

The legacy switch cannot provide the power so the injector does. (schematic below)

PoE Splitter – This Splits the data from the power and is used to connect a non PoE end device to PoE source. The power extracted by the splitter is often used to power the device using a separate power input.(schematic below)

Devices that are designed to meet any of the standards have built in power management.

When the end device is connected to the PSE negotiation takes place to determine how much power the device needs, and how it will be supplied.

If the PSE doesn’t detect this negotiation it doesn’t supply power.

This means that it is safe to plug a non PoE end devices into a PoE port and not experience any problems.

The following set up negotiation steps are taken from the wiki

The set up phases are as follows:

The rules for this power negotiation are:

The main benefit are easy installation and cost saving as there is no need to run mains power to the device. This also means better safety as POE uses lower voltages than AC mains.

There are several non standard implementations but the most common one is known as passive PoE.

It is generally used to supply lower voltages (24V) but uses the same Pin out arrangements as 802.3af mode B or 802.3af Mode A for Gigabit Ethernet.

However the crucial difference is that passive devices do not negotiate with the power source and so power is always applied.

Q- Can I power my Raspberry pi using PoE

Q- What is the maximum distance between PSE e.g switch and PD e.g IP camera?

A- 100m is the limit imposed by Ethernet for the data signal. You can extend this using a PoE extender/repeater.

A- No it uses a standard Ethernet cable.

Power Over Ethernet (PoE) is a method of providing power to remote devices on a LAN using a standard Ethernet cable thus removing the need for a remote mains power supply.

It has been standardised by the IEEE but there are also vendor implementations that are non standard. The main one to be aware of is Passive PoE.

Please Let me Know if you found it Useful
[Total: 15 Average: 4]