Having fast and reliable Wi-Fi coverage in the house and maybe in the garden and out building is becoming more and more important.

Wi-Fi mesh networks are a fast growing area in the home networking arena.

Traditional WI-Fi networks use a central access point to connect the wireless nodes together and to the Internet.

The main disadvantage of extending a network using wireless range extenders and access points is that you create several wireless networks which means that when moving between them you need to log off from one and then log on to the other.

They aren’t really designed to extend an existing Wi-Fi network, but to replace it.

They comprise 2 or more Wi-Fi nodes that work together to offer a single Wi-Fi network (one SSID), and devices can hop seamlessly across the nodes as they move within the network.

There seems to be two approaches to these systems.

The Google approach is to replace the existing WI-FI network and home router with the Google Wi-Fi discs or access nodes.

The other approach taken by BT, for example, is to keep the existing internet router and replace the Wi-Fi network.

The access nodes need to be able to communicate with each other. 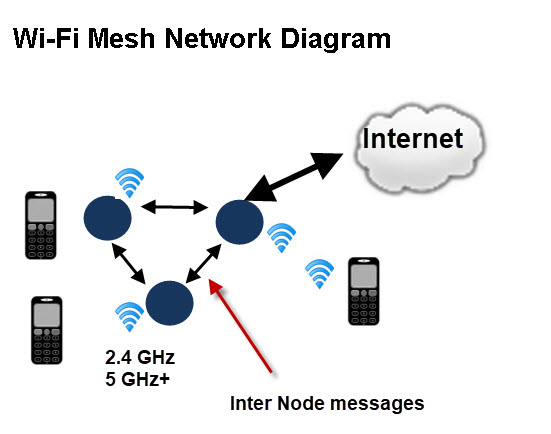 Again there are two main approaches.

One approach uses a dedicated Wi-Fi network used solely for the nodes to communicate with each other (BT approach).

The other approach used by Google is to use a dual band access point 2.4GHz network Plus a 5Ghz network.

The inter node messages use the same networks as the end devices.

Expanding an existing Wi-Fi mesh network by adding additional nodes is easy ,but you must use equipment from the same manufacturer as the existing system.

In addition to providing Wi-Fi connectivity they also provide advanced features, not available on standard home Wi-Fi networks; like:

This Google WiFI review by Engadget will give you a good idea of what these systems do.

Q- I have a dead spot in the house would you recommend changing to a Mesh System.

A- No I would use a homeplug with wi-fi as my first choice or a range extender as second choice.

Q- I’ve just moved into a new house should I get a mesh system.

A- Yes That would be my choice

Q- Can I use Wired connections in a Wi-Fi Mesh

Q- Can I use my existing router with my Wi-Fi mesh network.