In the early days of networking splitting a network into segments required a router.

VLANS or Virtual LANS is a technology that allows you to split a home network into segments using low cost switches.

Generally a switch will send broadcast traffic to all connected ports, and will allow devices connected on any port to communicate with any other device.

VLANS were created in order to reduce the amount of broadcast traffic on a network.

However on home networks they are used mainly to improve network security.

If we consider a switch with 8 ports as shown in the schematic below.

A broadcast sent from a device attached to any port will be sent to all ports.

This becomes problematic when you have untrusted devices with access to your network or as in the case of home automation you have IOT devices that are possibly vulnerable to attack.

However with a VLAN capable switch it is possible to restrict broadcasts and to control which devices can communicate with each other.

This makes it possible to design a more secure home network.

If we now take out 8 port switch and split it into two VLANs which we call VLAN1 and VLAN2 as shown below. 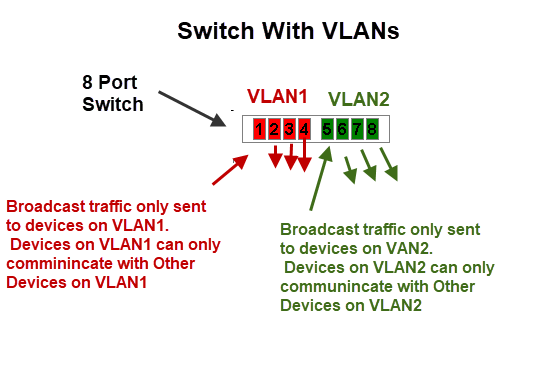 VLAN Uses on A Home Network

The main use is for security where you want to isolate certain machines from the main network.

You will need to choose which devices to use to implement your VLAN and the VLAN mode to use.

VLANs are supported on routers (not all) and on network switches.

On routers the VLANS have different IP subnets.

which mode you need to use will depend on your network requirements.

This uses a shared uplink port that is normally connected to the Internet.

The other ports can send and receive data on the uplink port but not between each other as shown in the schematic below: 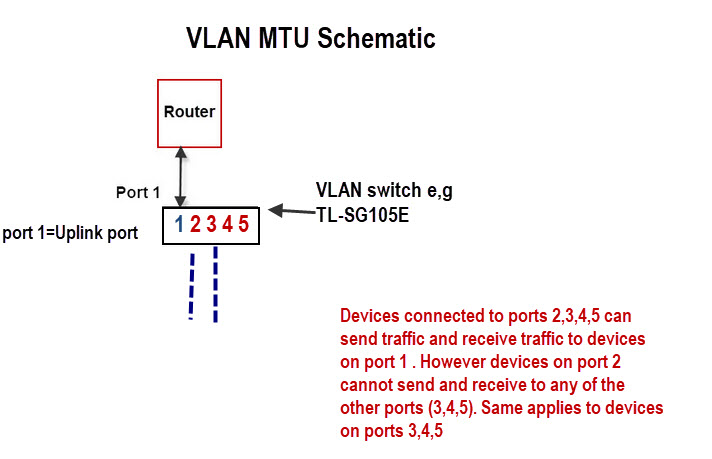 This is very easy to configure as all you really need to do is choose the uplink port (shared port) and enable it.

For example it can be used to:

The schematic below shows the basic layout: 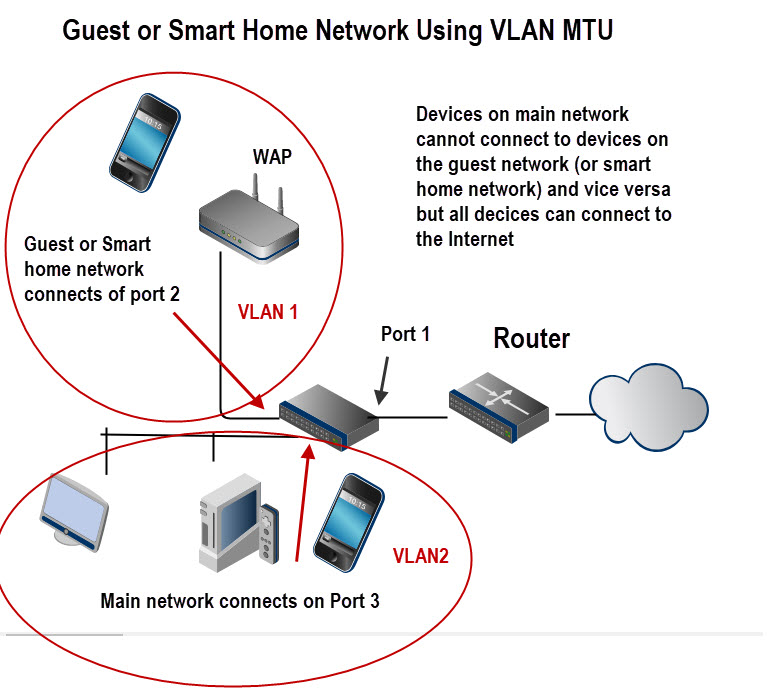 In this mode a VLAN can consist of several ports but a port can only exist on one VLAN.

It is used when you want to create an isolated network.

A possible configuration is shown in the schematic below: 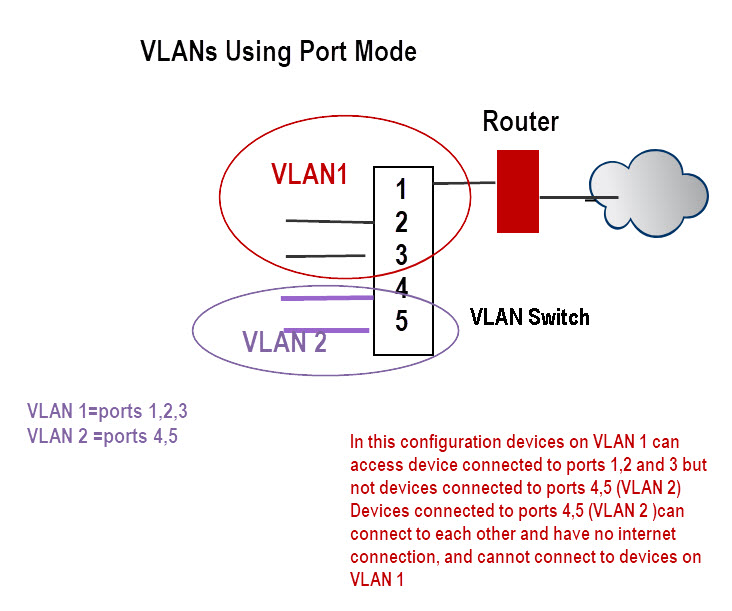 Devices connected to ports 4,5 (VLAN 2 ) can connect to each other and have no internet connection, and cannot connect to devices on VLAN 1

This is the most flexible mode but also the most difficult one to configure.

The IEEE 802.1Q protocol defines a new format for the Ethernet data frame by inserting a VLAN tag in the data frame data frame as shown in the schematic below:

Tagging is used when you have multiple VLAN switches and a distributed VLAN.

Now you want some devices in the living room to be on the same VLAN.

Because they are physically connected to two different switches you will need to used tagging.

Because this is more complex I will cover it in its own tutorial at a later date but TP-Link include it as an example here.

For this tutorial we will take an example of a single switch with no tagging and configure two VLANs (main and guest ) with both VLANs able to connect to the Internet.

The following schematic is a modified schematic taken from the tplink site here. 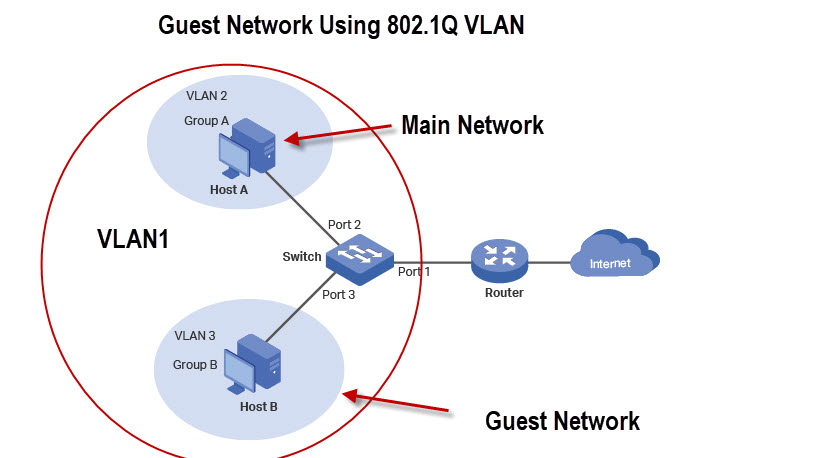 Although we have only two networks (guest and main) we require 3 VLANs.

As port 1 connects the switch to the router all ports need access to this port and so we configure VLAN1 as the default to include all ports. 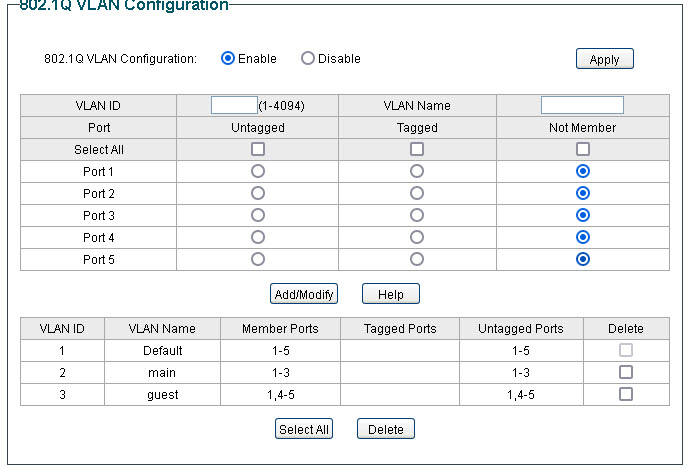 Now the not very obvious configuration is the PVID settings which must be done for this to work the PVID must match the VLAN ID.

This is the configuration I use for a guest network on my home network.

My TPlink Router also supports VLANS, and so I connect my guest network which is in the basement to LAN1 (port1) and assign it to its own VLAN.

There is no option to assign a Wan Interface as it automatically is allowed. 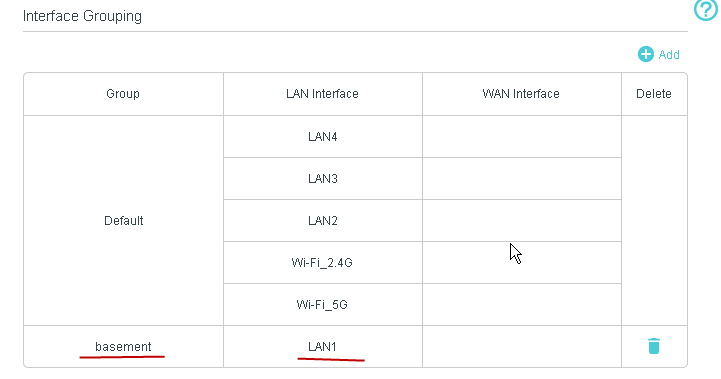 This is a schematic of my home network using the TP-link router.. 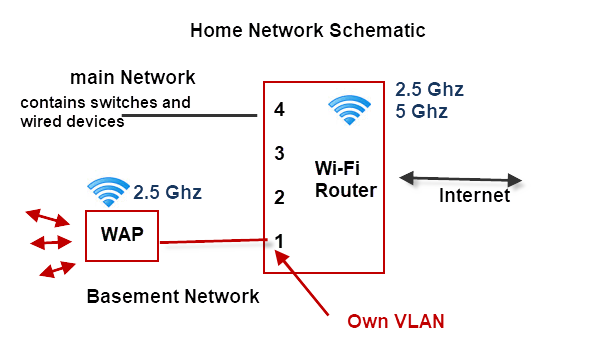 The DHCP server on the router is automatically configured to assign addresses on the new subnet as shown below:

The easiest way of testing is using the ping command.

You should not be able to ping machines on different VLANs.

You have lodgers or a guest house and want to isolate guest machines from your main network but give them access to the Internet.

Your router doesn’t support VLANs and guest Wi-Fi doesn’t have the range. You cannot change the router and both the guest and main network need Wi-Fi access

You will need a VLAN capable switch to split the network. You will also need to Wireless access points and shouldn’t use the WI-Fi provided by the main router.

A schematic is show below: 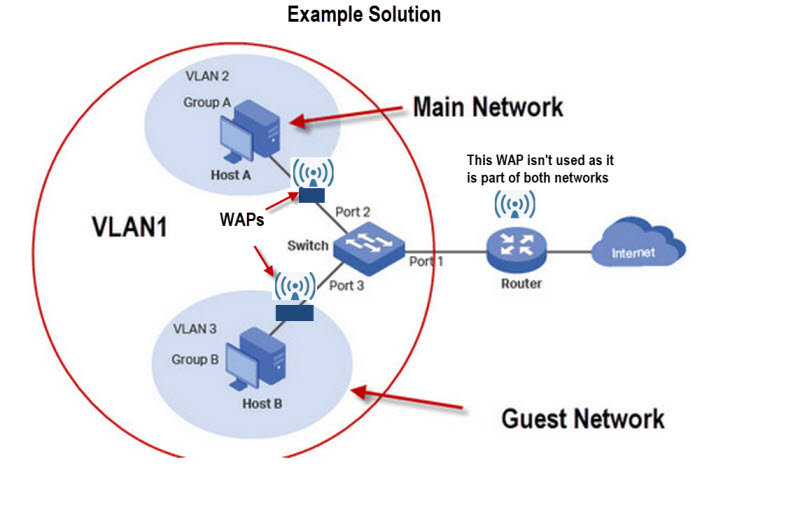 The above solution can be achieved using 802.1Q VLAN or MTU VLAN modes on the switch.

Referring to the schematic for solution 1 above.

Q1- If you connect a device to the main Wi-Fi router using Wi-Fi will you be able to ping a devices on the guest and main network? Yes or No.

Q3: The main router also has 3 spare Ethernet ports. Can you use them?

Q4 On what device do you think the DHCP server is located?

A3 If you do it will not be secure.

A4 The main router

Usually if the switch is labelled as a smart switch or managed switch it will have VLAN support but you should read the description to be sure.

Below is screen shot from Amazon of a TP-link switch (£30) that supports VLANs. 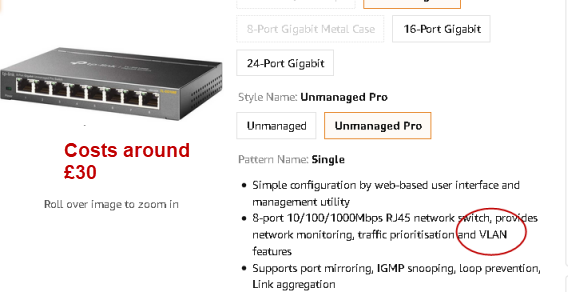 VLANs provide an excellent and low cost method of greatly improving you home network security and should be considered if you share your network with guests, and or have IOT devices connected to your Network.

broadcast traffic– traffic that is end to all hosts(devices) on an network. Many network services rely on this type of traffic e.g ARP and DHCP.

ARP– protocol used to resolve obtain the MAC address of a device using and iP address.