A home typical home network consists of many different components, such as:

The following connection technologies and their approximate speeds are shown below:

Note:
old powerline adaptors may have an Ethernet connection of 100Mbps which would limit the connection speed to that.

note1– All fibre connections have a top speed of around 300Mbps

Just like traffic on roads network traffic flows predominately in a certain direction.

For traffic on roads the flow is usually heavy into and out of cities, and you will notice that the size of the roads reflects this.

On home networks the flow is predominately to and from the Internet, and so your network design should also reflect this.

However if you look at the tables above you can see that the slowest Ethernet, the slowest Wi-Fi and the slowest powerline are all usually faster than the fastest Internet speed.

Therefore for most home networks the main reason for slow connections is the Internet speed, and not the local network.

So when considering exchanging equipment for speed reasons you should be aware of this fact.

However it may not always be the case!

To illustrate we will look at a couple of example network topologies and answer a few questions regarding speeds and improvements. 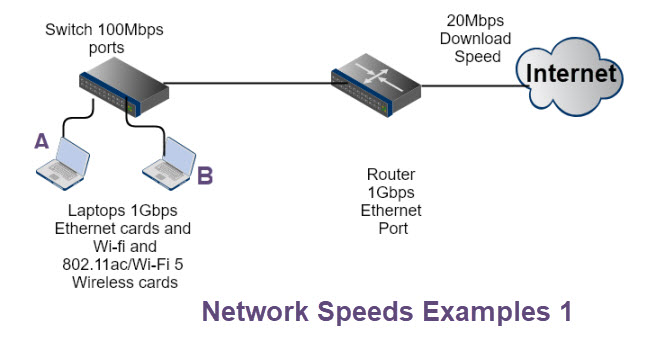 Referring to the network diagram above answer the following questions:

Q3- Would upgrading the switch to a 1Gbps switch improve the Internet download speed.

Q6 -If we now Upgrade the Internet connection to fast fibre 70Mbps what would now be the maximum Internet download speed be for laptops A and B.

A1- 20 Mbps limited by the Internet Connection

A5- Yes could possibly get 200Mbps

A6- 70 Mbps limited by the Internet Connection 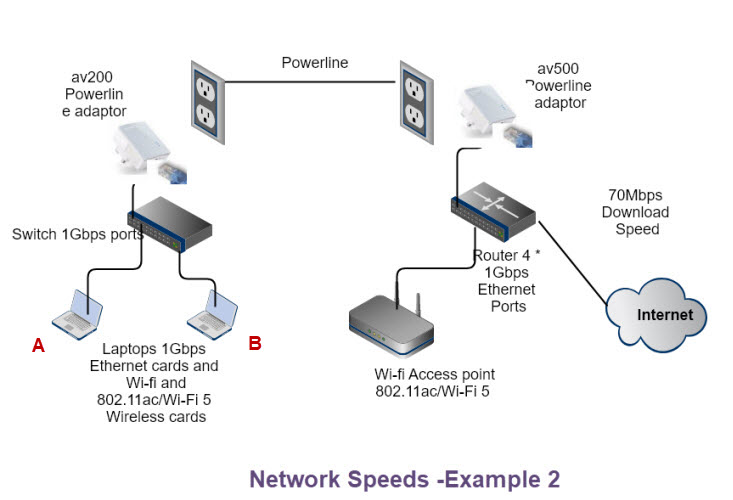 Referring to the network diagram above (example 2) answer the following questions:

A1- 70 Mbps limited by the Internet Connection

A3- Perhaps- The speed over the link is limited by the AV200 and is close to the maximum Internet speed and depending on the home wiring may be less so an upgrade might be considered.

A4- No as it would still have the 70Mbps limit

A5- No it would make it slower

Most people are familiar with Internet speed checks. These are all done using a web browser and rely on a server on the Internet that sends and receives data from the browser.

To do the same on a local network requires that you have a server located somewhere on your local network that does the same as the ones on the Internet.

Because of this requirement local network speed checks aren’t so easy to perform.

There are many free speed testing utilities available but the iperf utility is the only one that runs on windows, Linux, Pi, Android and IOS.

The only negative with it is that it uses the command line.

Here are a few screen shots that show the effect of distance on Wi-Fi speed.

For the following tests the server was on a laptop connected by Wi-Fi and the client on a windows machine connected via Ethernet cable through a 100Mbps switch. 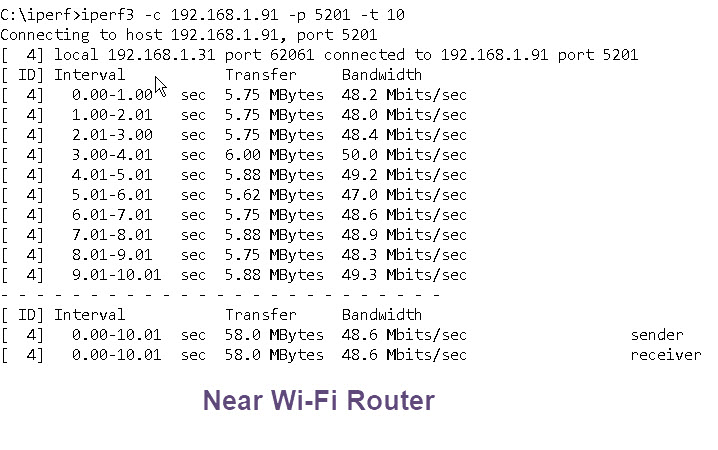 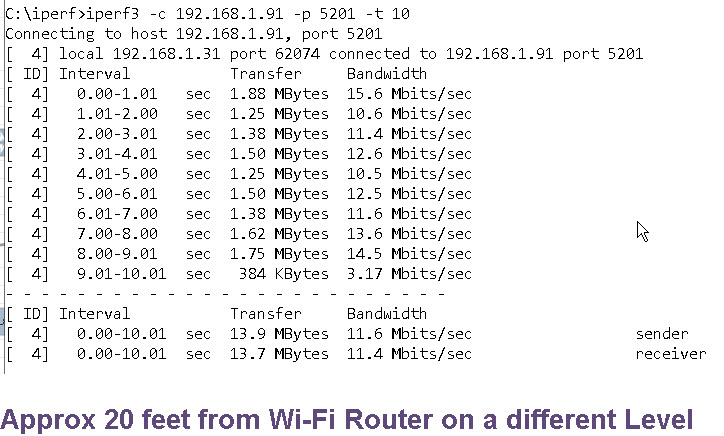 You can clearly see the how the speed reduces as you move away from the Access point.

Unfortunately there is no run forever switch so if you want to do tests over an extended period then it is difficult.I create this simple batch script that will run until interrupted and sends results to a file results.log.

It is important to be aware of the different home networking technologies and their possible speeds when laying out your home network.

You should also note that speeds using Wi-Fi in particular but also homeplug can vary considerably.

Please Let me Know if you found it Useful
[Total: 2 Average: 5]